Should bodybuilders use steroids?

I thought they had to take a polygraph test, which would mean they couldn't take steroids.And how is it obvious someone is using?

They lead to many false positives and false negatives - and failing one usually only leads to further investigation. An investigation that is not guaranteed to uncover anything. One can fail, and as long as no other evidence is found, still compete. It's why they aren't admissible as evidence in most if not all courts.

Many FBBs are known to use testosterone.

My older sister was a nurse's aid in a nursing home for her entire career.

I never saw her in a two-piece bathing suit - she was too modest - but I saw her in a sleeveless shirt when we assembled her above ground swimming pool.

The peaks of her biceps were as large and well-defined as many women on this site.

The peaks of her biceps were as large and well-defined as many women on this site.

Sure, but I doubt she had the whole body leanness and hardness that PEDs allow. They aren't just to build biceps peaks.

you're not a bodybuilder if you don't use steroids

The answer to your question is: No, they should not! Why? Steroids are not good for your health. Misuse of medicine is illegal. They are expensive. Spend your money for the education of your children (or your own).

I think you wanted to ask: "Should ambitious bodybuilders use steroids". Then the answer is: Hell Yeah!

This is not a yes / no question. We usually define steroids as every supplement that is banned by olympic sporting associations. But even among banned substances there is a wide range on how harmful are they. And the harm being irreversible highly depends on how it's used.

It is ultimately up to everyone's own consciousness what they do. But if you ask me, I think female bodybuilders should not use testosterone. It might help them build muscle fast, and more of it. But it also turns them borderline transgender within a few years time. I'm attracted to women, not transgenderism. Of course you can dance on the fence, trying to hide the masculine features that develop as a side effect. But I'd not want any women to do that to fulfill my fantasies. I'd rather they are less muscular but clean. I much prefer symmetry, definition, and femininity over raw muscle mass.

I look at it like this. Nobody is clueless to the long term harmful effects. But just like I don't judge people who smoke or nag people who overindulge in fatty foods. I say do what you wish and live with the consequences.

There's the ANBF (American Natural Bodybuilding Federation). Natural FBB's look great, but they sure aren't a majority on this site, and they are closer to what the IFBB calls figure. See Patricia Beckman: 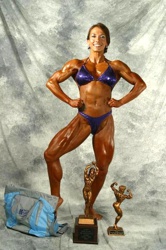 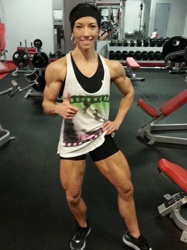 Natural means "natural now" not "natural always". And if you're doing a natural show, which most have BS testing, means you've been off long enough to not get flagged from the testing.

Who cares 🙄 people should be able to do whatever they want

Yes. Hell, I'd make their use mandatory.

We all put our pants on one leg at a time.

We all put our pants on one leg at a time.

Who is this eloquent athlete?

Who is this eloquent athlete?

It amuses me whenever the anti-steroid brigade comes out of the woodwork on a website dedicated to muscle. The irony is a bit silly. The truth is that 99% of serious competitors use them.

And at the end of the day, it's their body and their choice. People say things like "They're putting their longterm health at risk!" pretending they have these women's best interests at heart.

And yet you wouldn't think twice about pounding down a greasy burger and fries. A lot of things people choose to do impact their health but we still have the freedom to make those choices for ourselves.

It amuses me as well. The majority of women on here are, or have been at some point, on some kind of compound. A buddy of mine who has been around the fitness industry for years put it eloquently when he said "if they're making a living off their body, they're on something." Whether we like it or not (and that's a whole other debate for another time,) the fitness industry markets itself through appearance and physique, not actual health. There's also an irony (speaking from American culture,) in that for as much as we stigmatize PED use as "cheating," we turn a blind eye towards our star athletes who are on those compounds, so long as they're scoring touchdowns for our favorite football team, or getting gold medals while representing our country.

I think steroid use needs to be destigmatized for a couple reasons. One, it gets rid of the myth that steroids are a "magic pill." Yes, they work, but you still need to put in the work in order to get the benefits. And furthermore, destigmatizing them would probably lead to less of a glut of nonsense supplements that athletes hawk relentlessly on social media. The supplement industry is a multi-billion dollar industry, and it's one that shouldn't exist: the vast majority of those products are useless. And if people were better educated about how to properly fuel their bodies, train and recover, they would not be persuaded by some ridiculously ripped man or woman who obviously is on something hawk some powder and claim that that's how they got their gains.

And furthermore, destigmatizing them [steroids] would probably lead to less of a glut of nonsense supplements that athletes hawk relentlessly on social media. The supplement industry is a multi-billion dollar industry, and it's one that shouldn't exist: the vast majority of those products are useless.

I would add specifically that steroid use isn't just for bodybuilders-- its at all levels of the fitness industry-- bikini, physique, bodybuilding, crossfit.

And, also-- the images circulating in social media are a form of fiction, since no one actually looks like that on a regular basis. That hard, lean look is combined with a typical story that bodybuilding/fitness models get their physiques through "eating clean, working really hard, and taking supplements." Yes-- eating clean, working hard, and eating protein, but there are also other magic ingredients.

(This fuels another scam-- that guys can hang out at a gym and find a woman like in social media images. Hence, threads like this: https://www.girlswithmuscle.com/forum/thread... .)

There's the ANBF (American Natural Bodybuilding Federation). Natural FBB's look great, but they sure aren't a majority on this site, and they are closer to what the IFBB calls figure.

Sorry mate, these girls are NOT natural. Not even close.

Bodybuilding must be the only sport where there's competitions for athletes who aren't on drugs.

No, but I see what you're saying and that is fucking funny when you think about it.

"Ma'am, your urine sample came back positive for PEDS, you should be in that line over there."

Steroids should be illegal in society for the same reason they should be prohibited from sports: They coerce participants into unhealthy, counter-productive competition. It's like with the antlers on bull elks. Their antlers' purpose is to help battle other males for mates, but they also make bull elks slower and more vulnerable to predators. All would be better off if they could agree on 20lb antlers instead of 40lb antlers. It's a basic collective action problem.

Of course, if steroids vanished, the most muscular women on this site would be relatively tiny. Then again, you wouldn't be inured to current expectations.

It seems to me that the "everyone is on steroids" bunch are talking out of jealousy. I've seen enough to know that people with the right genetics and enough workout can become ripped and lean without using drugs. What you need steroids for is to become extremely big and bulky, especially in a short period of time. And of course to squeeze out that extra 1% performance in competitive sports.