Have your tastes changed overtime?

This is inspired by ChatzkiReborn's thread in regards to losing passion over female muscle, particularly a comment made by fp909:

"I will say that the spectrum of my fandom has changed and I no longer am looking at some of the larger women the same anymore and a bigger portion of what I’m viewing and saving is more of the 'fit girl' look with assorted figure or WPD competitors thrown in."

I can agree. Younger me loved the beefy gals, and I still do. But I've learned to love their trim figure counterparts just as much. Maybe that has more to do with that look getting better, though.

What's say you? How's your tastes changed over the years?

In my younger days I had some pretty unrealistic standards of how I wanted women to look, but over time my expectations and understanding of the female body changed. I prefer feminine bodies that are sleek and compact compared to what I used to prefer. Also learning over time about all of the negative side effects that come with steroid abuse factored into that. I don't particularly enjoy seeing a woman destroy her body, knowing what I know now. Steroids are a part of it for most, and many women are responsible and educated enough to use PED's properly but there are still too many obvious abusers who make me cringe.

I prefer feminine bodies that are sleek and compact compared to what I used to prefer. Also learning over time about all of the negative side effects that come with steroid abuse factored into that.

Agreed. I recently revisited my favorite bodybuilders and realized they weren't exactly the biggest.

Steroids are a part of it for most, and many women are responsible and educated enough to use PED's properly...

I wonder if that contributes to taste, too. I'm sure most would agree that the ladies who use better look better. With all the info out there now, ladies don't have to succumb to side effects as harshly.

I am old enough to have seen what once passed for a female bodybuilder and how that changed dramatically in the 80s and 90s. Looking at the originals in the sport... some housewives are attaining that level of muscularity these days! So I don't know if my tastes have changed as much as the sport has evolved to something that isn't up my alley. I prefer feminine looks and voice, lean muscle, nice peaks (like Fred) and that was the case 35 years ago, too. So the long answer, my tastes haven't changed much.

No. Still prefer beautiful asians. Although I can admire others aswell.

I used to only care about leg muscle

When I first experienced seeing muscular women, anything fascinated me. Particularly I liked the really big muscular women. Over time I have learned to see women and think hmmm... thats not natural. I also liked women with super defined asses.. I've read from other people commenting that they use silicone injections to accentuate their glutes. That kind of treatment is a real turn off.

Nope. Loved the big gurls from the beginning. Love them just as much now.

My taste have definitely change because I was and still am into huge bodybuilding women but nowadays I prefer more the huge and smaller bodybuilding women. I'm on equal terms with them. If you look at my favorite list you will see a variety of FBB's from big to small.

definitely. i used to only like anllela sagra and over time my taste has gotten more... extreme.

definitely. i used to only like anllela sagra and over time my taste has gotten more... extreme.

Just saw your favorites. Going from Anllela to Yaxeni... My man lol

Still not into legs and back.

HAHAHA hellohotbeef... quite a shift in taste eh? the only person who accepts and knows about my fetish is my brother and he says liking yanexi is weird even in my standards

I've gotten attracted to bigger as time goes on. Used to be back in the day my dad would watch bikini and maybe figure competitions on ESPN and then I'd find a woman who went up on the scale until jacked up FBB.

I remember seeing this photo of Kay 30+ years ago, and thinking "Wow, she's way too big." 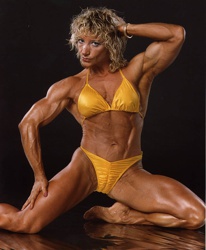 Now, a girl that size barely makes my cock twitch...

Not really. I have always been most attracted to the biggest girls, but biggest means way bigger than more than 30 years ago when I nervous as hell bought my first issue of a bodybuilding magazine with a female bodybuilder on the frontpage. If I only could've looked into the future to this date I think I would've got completely mad seeing how muscular a woman could be.

My taste hasn't also changed. From the begin I love women as huge as possible. But since early 80's the women change a lot.

My access to female muscle at the start was very rare. Coming from a 3rd world country with no internet ( 20 years ago ). If I even saw a hint of a bicep on tv or a simple feat of strength, I got excited.

Then internet happened and I was introduced to real fbbs. My preference was mostly bikini girls or maybe some figure ones. I didn't like the big ones.

Now the bigger the better. Only BB or physique gets me excited . Sometimes maybe figure but bikini doesn't do anything for me. Especially bikini girls with muscles who weigh like 75 lbs.

So yeah, my taste went from small to big in the last 20 years

Actually, no. I’ve always been into the bigger, roided up women that tend to give off a feminine side. Really the only thing that changed, naturally, is the age. When I was you know 16 I was looking for teenagers with muscle and now that I’m 30, I go for around my age the most. Not that I’m TOO picky.

My ideal musclegirl was always something like Tetsuko: sweet, feminine, AND muscular... but these days I'm less willing to compromise on the femininity than the muscularity. I'm also less aroused by the shredded contest-ready look than I used to be.

I feel lucky in that my taste in muscle has expanded over time. I love the huge women but also still love the smaller look from the 80s that got me started. I just love muscle in all forms.

My taste is huge to small 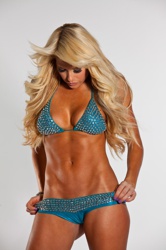 Hmmm, this thread made me view my own question in my original thread from a different angle. I guess i also have just grown up (suitable word here since i am here since about the age of 14) and toned it down a tiny bit

I started young, around the age of twelve. Probably my early exposure were women like Christie Brinkley in those Total Gym tv ads 20 years ago. As the internet opened up to me my I got more eyeballs on women like Jaime Koeppe, then Cindy Phillips, then some of the bigger WPW women like Annie R or Michelle Maroldo. That kind of continued on until recently, and though I still like some size aesthetics have become really important, mostly. Women like Shannon Courtney, Brooke Walker, Kate Hart, Hunter Henderson are ones that really, really do it for me, and VERY recently I've kind of glommed onto "smaller" women like Heather Grimes, Sophie Hemphill (although she has really beefed up), and girls you find social media pretty easily.

Looking at the originals in the sport... some housewives are attaining that level of muscularity these days

Some of the random Crossfit, TikTok, or IG girls I like the most are legitimately bigger and more developed than any of the earliest women I was looking at in the early days of femflex or femsport or athleticwomenmagazine. It's actually crazy. Not even big names. Just some random woman who likes to work out and would have probably made it to the Olympia in the early 90s.

Open question--how much of your change in tastes (up or downsize) was affected by reading some of those old stories early on, or figuring what was possible to encounter in real life as you got older?

Steroids are a part of it for most, and many women are responsible and educated enough to use PED's properly but there are still too many obvious abusers who make me cringe.

There are a few women who manage to get away with it and they are on the top of my lists usually, but yeah, this has been big for me recently. There was also a time where I could disregard the face altogether, but now I really have to find them facially attractive. There aren't too many smokeshows in WPD, figure has a ton, but the regular gym girl with some size and shape is my bigger preference now.

...not that I wouldn't say no to an experience with a larger girl...