It's April 1st, which means it's time for an experimental feature. Last year it was Hidden Gems, this year it's Similar Images.

If you're logged in, any time you go to an image that a score of at least 25, you will see this new link under it at the bottom of the info box: 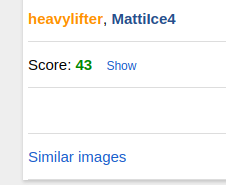 This will take you to a page of 150 images that the site thinks are similar to the starting image. It does this by looking at the other favorites of users who favorited the original image. The final ordering that you see is determined by a bunch of factors, including overlapping favorites, the scores of the images, as well as the number of favorites each user has given.

The goal of this is to allow you to find new pictures you'll like that you haven't seen before. I think you'll get the best results by starting on an image you like (for example, from your favorites), but here are a few examples I've found:

If you start with a very focused pic, for example the abs one above, you're more likely to get a higher concentration of similarly focused images. The less focused the initial pic, the wider the variety you will see in the results. Even so, I've found that as long as I like the original picture, I also like the majority of the pics in the output.

Also note that the results you get are from approximately the time period of the original image, so if you start from an older pic, you'll get older results.

The downside: This is pretty resource intensive for the server, so I'm planning on keeping this around for a few days and then seeing what it does to the server load. I may remove it. Also, for performance reasons, this is only available to logged in users.

Just tried it. It’s awesome! As advertised. Thanks Chainer

The goal of this is to allow you to find new pictures you'll like that you haven't seen before.

Well done Chainer. I hope it can last.

Great work, one of your best ideas yet.

I saw pics and vids that are new to me even though I've visited the site for years already. Hope it really takes off, I feel like this is where we'll see more hidden gems

Agree with asqwert. This certainly is superior to hidden gems. This really improves the site immensely. Thanks Chainer

Man, quite some skilled programmers working on this site. Awesome, seems to work pretty nicely. Out of curiosity, does GWM use a NoSQL / Graph database or are you able to do this with a classical relational database? Do you cache the pairings or is it always recomputed?

This is a very creative way of combining human pattern recognition and dopamine response with statistical overlaps in order to return image results that users will find appealing.

Who needs machine learning when you can just hijack users' own content preference behaviours to generate ultra-specific recommendations?

This appears to be very effective, great work everyone involved!

I like this a lot, and it does seem to work. Seems a bit slow though?

Love it Chainer! Does this also return images with similar tags? It says "users who liked X Also liked Y" but some of the images don't seem to use the same tags as the source image

That feature is awesome, thank you!

This new feature is amazing! Works very well. It’s the feature nobody knew they wanted but now can’t live without lol well done!!!

Glad this is catching on!

Out of curiosity, does GWM use a NoSQL / Graph database or are you able to do this with a classical relational database? Do you cache the pairings or is it always recomputed?

Relational DB (Postgres). The pairings are cached for 10 mins after they are loaded by someone. I didn't think longer caching would really make a difference; I don't want to cache results for newer pics because they might change, and as for older pics, there are too many for caching to make a meaningful difference.

Seems a bit slow though?

Yes, it does take 5-10 seconds to generate results for a single image.

Does this also return images with similar tags?

It does not take tags into account at all.

I like this feature alot it made me find amazing pics in a short time.

this is a feature i was hoping this site would implement!

Algorithm works great, knocked the ball out of the park, great stuff 👌

This is great. Each subject picture matched a lot of others with similar muscle tone. I searched a group pic and it came up with some other group pics. Abs pics focus on abs, biceps on biceps, etc. Awesome feature!

Did you base you approach on an existing algorithm somewhere?