We were preparing for take-off and as the stewardess that was checking that everyone had fastened their seat belts in my section of the plane walked by me I noticed she was very built. She kind of appeared right beside me, as I wasn't paying attention before, so I saw her from the corner of my eye and she was gone immediately, but that was enough to keep me alert. There would be no napping for me on this flight, as I would seek a chance to take a better look.

After take-off they started serving snacks and, lucky me, she was on my section again. This time I took a much better look of her - still being as discrete as possible - and confirmed what I had seen before: she was tall and broad-shouldered and she had that stance that we muscle girl lovers easily recognize as a muscular female physique. She had a dress on that wouldn't reveal much - dark, just below knees, no cleavage, sleeves almost to the elbows - but it was enough to see that she was really built. No outrageous muscle bulging everywhere, mind you, but nice, muscular curves and proportions. She also had a pretty face and smooth skin - so no obvious sign of juicing, despite her much-above average build.

I knew I'd have a very narrow window of opportunity for an approach, as it was a short flight - 60 minutes or so - so right after the snacks I made sure she was in the rear galley (the closest) and pretended I had to pee. As I reached the lavatory (vacant), I pretended to be confused by the door (pretty stupid, but I was beyond trying to impress her; I just needed an excuse) and asked her: "Is this free or what?" (VERY stupid).

She had been standing and talking to another stewardess, but then turned to help me: “Yes, it is. You just need to push it like this.” And then she proceeded to push the door open for me, which put her arm right in front of me and gave me the opportunity I needed:
“Wow. You work out, don’t you?”, I said, looking at her arm.

She was a little bit surprised, but I could see she was pleased: “Well… Yes! I think it shows.” She smiled, putting her hands on her waist, and managed to sound a little annoyed at having to answer something that she considered (and was) so obvious, but in pretty good spirit - almost playfully.

That was it. Her looks, her attitude, her sheer presence - she was probably 5’10” or so. I got really excited and started blabbering: “Are you a b-bodybuilder?”

“Nooo!”, still almost playful. “For me, that would be too much. Besides, I don’t wanna compete or anything. I just like being strong.”

Oh, god. I’m no longer capable of subtleties. “Can I see your arm - your bicep?”, almost panting.

She hesitated for a bit and my heart started to sink. I thought to myself: “That’s it, you pulled the ‘creep’ move”.

Then she smiled and said “Haaa!” while flexing with one arm and sliding the sleeve to reveal a hard, popping bicep - not very peaky, but round and full - slightly stretching that smooth skin, a taut tricep nicely arching the whole length of her arm, a curvy and thick forearm that showed its muscles well. Those were easily 14” arms, perhaps more. She knew how to flex and she enjoyed it too.

My jaw dropped and I completely lost it. At this point I wasn’t giving a flying fuck to what anyone seeing this (including the other stewardess not three feet away) would think - I only had eyes and mind to that goddess before me and the beautiful muscles she was so joyfully displaying. I was actually waving both hands slightly and managed to blabber, “Can I?”, while motioning to touch her bicep.

Without breaking her smile or good spirit, she lowered her arm, replacing her fist in her waist, and said, “Nooo…”. Smiling all the while.

That did it for a rough landing (figuratively). I sobered up and for the first time took real notice of the other stewardess, who was laughing slightly at my dumb adoration of her colleague. “Ok, NOW I pulled the ‘creep’ move”, I thought.

“Right… Of course, I mean… Sorry, I didn’t mean be indiscrete or anything… But congratulations on your hard work!”, I blabbered. The words sounded slurry, barely apologetic.

I felt like an ass for the rest of the flight. At that time, I was pretty overweight and very self-conscious about that. I had terrible self-esteem and could not push away the thought that I had lost my dignity in front of a woman that, to me, was nothing short of a goddess. I knew I had no chance with her, but nevertheless it bothered me that I put on such a dumb display to her. Now I know it was probably not half as bad as I thought it was back then, but that’s how I felt at the moment.

After the landing, she was by the door greeting the passengers out and I could barely get myself to look at her. She smiled slightly as I approached and put her hands in her waist, just like she had when we were talking before, and kept looking at me as I greeted the stewards by the door on my way out. I might have blabbered another apology to her, but I really can’t tell. I was feeling so ashamed.

Anyway, this is it. Not much of a story, I know, but, as I said, it was one of my first chance encounters with a muscular girl. I got a lot better at these later in life as I grew more experienced and in better shape - even being asked if I was an offseason athlete myself at times, which helped enormously with approaching - and I can’t help but wonder if this story might not have a different ending (or even a continuation?) had it happened a few years later. 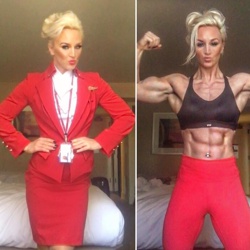 She didn't seem to be nowhere as ripped as Ayme, but I kid you not, she seemed to have a larger frame overall. The guns seem about close, buy Ayme's are more defined.
« first < prev Page 1 of 1 next > last »
/comments/render_markdown/
“ 🔗 B i 1. • help Preview
Email: girlswithmuscle (at) gmail (dot) com
Privacy policy | Report abuse