What happens when an ultra rich man meets the object of his fetish?  To what lengths will he go to realize the fulfillment of his fantasies? Charles Ballmer dreamed about an ultra muscular women since his youth. When he  encounters Krista, who’s physique embodies his desires, it seems to be a match made in heaven.

Krista Welch was ahead of her time for the 1980s. A feminist with a chip on her shoulder, she sets out out to deconstruct the label of the ‘weaker sex.’ Overcoming sexism in the gym in order to live out her dream, she builds a physique that gets her noticed by all the wrong men. Unsatisfied with a string of schmoes and competitive muscle-men, she finally meets Charles, a successful businessman. After only a few dates she and Charles are kidnapped and she finds herself at the center of a strange web of corporate revenge.

By day Krista is injected with performance enhancing drugs and forced through grueling workouts and by night her body becomes the instrument of both ecstasy and torture. As her body grows to unimaginable proportions, she goes through internal changes that make her question who she really is as she struggles with the conflict of the desire to control someone and the nagging question of why. If she and Charles finally escape will her body be so colossal and mind be so contaminated by reprogramming that she can no longer live a normal life?

Strength and power radiated from her form as if concentrated, unbridled sex appeal. Sweaty and pumped from her workout she strode over to the mirror to inspect her body after completing the day’s prodigious efforts. The locker room for women was dark, dank, and pitiable at Bob’s Big Boy Gym in sunny southern California. It was as if the gym owners sought to chase women away. Even though the gym seemed perpetually on the verge of going under, the owners refused to entice the growing market of women. Instead, they went down the street to Linda Hamilton’s gym where women were encouraged to participate in aerobics, yoga, and more feminine activities. Lifting was a man’s occupation; the women’s locker room virtually screamed— go home girls. It was cold and empty, benches marked by peeling paint and showers virtually unused smelled musty and unclean. Krista didn’t care. A picture of Rachel McClish some seven years before had engaged her on a path to muscularity that far exceeded that of the former Olympian.

Krista twisted her hips back and forth in front of the mirror and contemplated what the swaying muscles might do to men who watched her hard figure—and there were many. Her deeply tanned, muscular body was highlighted by her abs, which resembled a brick wall. More than that, she thought as she drew in her breath and pulled her stomach in further. Each individual oblique responded and her abdominals swelled and seemed to erupt outward. It was well beyond washboard. Sucking the air in further, her abdominals extended further, like eight cubical islands emerging from a dark sea. She slowly curled her arms into a front double bicep pose. Twin bulbs of muscles arose from her arms ascending higher and higher. Her thick legs and muscular arms glistened after her workout creating an even more sensual vision. Krista smiled, appreciating the hard angles her body was forming. Sometimes her focus on getting stronger distracted her from the size her efforts in the gym also engendered, but she loved the visible growth too. Sometimes she felt she needed it, like an armor that would protect her from the world. It made her angry that she even thought like that, that women everywhere had to think like that.

Working out amongst the men at the seedy facility had never been easy. Even her noteworthy size and strength gains had only earned her passive recognition there. As she climbed up the national levels and had earned magazine shoots in Women’s Physique World, outright laughter and teasing had been replaced by noncommittal glances or in a few cases, grudging nods. Looking at herself in the mirror, she told herself she didn’t care. Her strength levels were off the charts, and her size gains were noteworthy as well. She knew she belonged and the intensity she applied to her workout regimen was proof enough for anyone who might question her. Krista had always been ahead of her time in bodybuilding and reveled in the muscle she was developing.

She knew her steroid regimen was partially responsible for the gains she made, but she liked to think that the supreme effort she put in during her workouts was the main cause. She looked over her shoulder to make sure there weren’t any visitors and flexed once more. The thick ball of her shoulder extended upward as if the top of a mountain. Extending her arm, her bicep seemed to explode into its pronounced peak that astonished so many. Even though powerlifting and strength was her focus, her biceps grew at a ridiculous pace and their mass had earned her some grudging respect from her male peers and picture shoots that helped pay for her regimen of drugs. Twisting her arm around the back, her triceps became clearly visible with its full horseshoe shape. Enough, she thought. Don’t get self-absorbed. Shower, put on your clothes, and go get your protein shake. She didn’t like that aspect of herself—her need to build her confidence by posing in front of the mirror, but somehow, she found herself here almost daily. Thankfully, she had a little voice in the back of her head that she listened to when the narcissism, which bodybuilding certainly fostered, threatened to careen out of control. 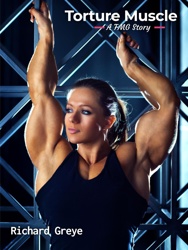 I’ve read all the books from this author, and it is significantly different from his previous works. The overarching topic of men with a fetish for female muscle is still present, the difference here is, Torture Muscle goes to a more extreme form of it. It will definitely please all the lovers of extreme female growth and science fiction altogether. It also highlights female domination in a fun way.

It is, as usual, very well written and spot on to describe the scenes and the interactions between the characters. The character development is strong and in depth. Also, sensual scenes are described, taking different forms as the story progresses.

It’s worth reading even if you are not a fan, at least for the author’s writing skills and also because this topic is dealt with far more realism than on internet forum boards.