Built: A FMG Story on Amazon this weekend 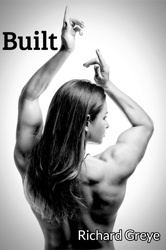 
What kind of woman needs to be stronger than every man? Built is the story of a woman with the tenacity and the means to become stronger than any person alive.

Reeling from losses, Andrew retreats from life unsure of how to go on. One thing he is clear about is his love and desire for muscular women. So when he meets Lizzy, tall and thin with haunting green eyes, she seems like an unlikely companion. Yet he is drawn to her.

Fighting her own demons, Lizzy seeks the security which physical strength can provide. Andrew has the resources to help her achieve these goals and surpass them. Soon Lizzy’s endeavors to build her strength consume her as she pushes to grow past normal limits. While she’s developing, her relationship with Andrew evolves, despite hurdles and hesitations.

When Lizzy’s desires collide with Andrew’s dream, will it be fulfilling love or too much to handle?  As Andrew draws closer to a life with his ultimate muscle fantasy he'll have to wrestle with the question; is too much ever enough when it comes to women and muscle? If his deepest yearnings come to fruition, can his pride handle his dreams?

Built follows the extraordinary evolution of one woman’s physique, highlighting how physical development can lead to emotional changes within her, and in the power dynamic of their relationship.

-------
Normally, I would have been hard as a rock looking at her veiny biceps corded with softball sized muscles on such a beautiful muscular woman. In the back of my mind I wondered if there was something wrong with me. She was the strongest, most muscular woman I’d ever seen in person and her face was beautiful. I thought she might be Czech or Eastern European as she reminded me of Pavla Brantalova only with about forty pounds more of muscle. In terms of size she was more like another Czech, Jitka Harazimova, perhaps even bigger. How could I not be reacting to her? She was exactly what I’d dialed up and she was kind. She smiled and after a pause between our sets and caught me off guard with a hug. The tremendous power of her simple embrace was intoxicating. It was as if I were being wrapped in a strait jacket of hard muscle and being thrust against soft luscious breasts.

Her words interrupted my interior monologue. “What would you like to see me do?”

“As much as you can,” my member was finally becoming hard.

“Okay, I probably shouldn’t, but let’s try 375. I’ll need a spot. Put your hands on my waist.” I put my hands on her waist and she paused under the bar breathing with purpose. Feeling her waist was a treat. Her abs were like steel and I couldn’t feel an ounce of fat surrounding them. I was now almost embarrassingly erect and so hard it was almost uncomfortable. Seconds later as she slowly began to rep out the weight my problem grew, literally. She completed seven reps and I thought she was done, but she stopped, breathed and went down again for another rep. I went down with her and spotted her helping her a little bit on the way up. She paused again and said, “get closer.” I moved right behind her and she said, “closer.” I brushed up against her, my rock-hard cock touching her ass. She smiled, “I thought so,” she whispered before squatting down for another rep. I mimicked her motion and dropped into a squat with her, my cock throbbing against her ass along the way. She finished the set and gave me an excited hug.

“That was a great set.” Pulling me tighter she whispered, “I can feel that you liked it too.” I became lightheaded with desire and when she released me and thought for a second I might collapse, but managed to stay upright.

When she concluded the set, she gave me an abs routine I knew I’d regret the next day before she went upstairs to get ready for our encounter in the hotel room. She closed with the demand, “I’ll know if you didn’t do it all so don’t cheat yourself or cheat me. I’ll make you pay later.”

“No,” she emphasized the word, “you won’t. Do what I say. I’ll be showering and getting into my outfit while you work out.”

“Okay, I’ll be good.” I watched her walk out of the gym as I launched into the first ab exercise, an ab dolly of some kind. I know that J Lo’s ass is seen as the classical butt, but the lack of wiggling fat and hard, rounded symmetry of her backside simply shamed Jennifer Lopez.

After I finished my never-ending sets of ab and core work I lay on the floor face down for a few minutes, exhausted. The last set of planks was the final straw, my woody had long since vanished with the work. Eventually I worked up the energy to towel off, get some water, and pledge to get back in shape prior to heading back upstairs. I hoped I’d given her enough of a head start because when I thought of her I began to harden once again and didn’t want to wait any longer.

After three raps on the door I heard some rattling on the other side followed by, “Just one minute.” Thirty seconds later I was starting to get impatient when the door creaked open. In a low, seductive voice she said as if in slow motion, “hello.” I was unable to move when I stared in at her, dumbfounded by her beauty.
1949474
taoschild101
Jul 14, 2019 - permalink
I've written a supplemental chapter for those who might have interest in how the story progresses after the 'finish.'  It has a pretty steamy sex scene (at least as far as I've written so far).  Here is the link: https://www.smashwords.com/books/view/948865
1949475
taoschild101
Aug 24, 2019 - permalink
If you’d like to receive the new chapter, post a quick review of the the original novel, Built, and take a screengrab of your review and the last page of the book and email it to me at –builtbonus at hotmail.com   We will send you the coupon for the new material that is available on smashwords https://www.smashwords.com/books/view/948865

Here is a small excerpt from Built that Qbikk used to demonstrate the prose for those of you who haven't yet had a chance to read it.  Thanks again for your support.

Her bunched up, massive glutes tied into a litany of muscles which a red dress tried in vain to cover. The picture was taken from behind, but the outer sweep of her fully developed quads were so enormous that they seemed to wrap around her legs and merge with densely packed hamstrings. Tanned, oiled, and striated, her muscles bulged and looked intensely powerful. Thickly detailed, veiny calves exploded out of her lower legs, cut up into a series of densely muscled ridges, running all the way up her legs. Next to it was a note from Lizzy. Too small!

“Holy shit, those legs are incredible.” I professed, hoping it would lead to a discussion about Lizzy’s seemingly monumental goals.

She wasn’t deterred from her mission. “Andrew.”

She grew quiet and looked at herself in her tiny mirror fiddling with her hair. With much hesitancy she almost whispered, “I’d like a mirror on the ceiling and the wall.”

“Yes,” she looked down as if embarrassed.

She hummed and hawed, “I put all this work in and I want to see what I look like.”

“You’re not getting vain about your body, are you?”

She reached over and grabbed my hand hard as I teased her. A quick flick of rage showed that my teasing wasn’t the right tact with her and she seemed caught off guard. My hand throbbed in pain under her powerful grip, but I didn’t let her know it hurt, intent on keeping my pride intact. Subconsciously, I began to fear that her demonstration of anger might be a delayed side effect of the serum. It also could have been that she didn’t know her strength or perhaps it involved her experiences with sexual assail and I had struck a nerve with the put down. My knees began to buckle under her grip and my arm began to shake. I’m not sure if it was from fear of her power or from the pain. There was no longer any doubt that she was stronger than I.