« first < prev Page 1 of 1 next > last »
1237086
/forum/thread/1237086/?page=1&quote=[id]
1945182
blackarckana
Jan 17, 2009 - permalink
Hello all, just curious. Where can one meet a cute (specifically referring to Girl Next Door types) muscle girls. As the vast majority of human beings are creatures of habit (ever culture has the warrior arch-type which, by their nature are "unavailable") it is likely that there are specific types of places that attract. Gyms obviously, but I haven't found many where I go. Besides, it would distract me from my training anyhow. Perhaps there are particular states such as Florida where people tend to be more geared towards health (with the type of clothing [or rather lack thereof] they have to wear in such weather, it's an inevitability). Does anyone know any places in the New York Area [Meaning New York City or Long Island] that attract such girls? Or perhaps I'm in the wrong state and might have to relocate. I'm currently in a position where I'm serious about settling down, which is why I'm in pursuit (in all humble honesty).

Thank you.
1945183
kngubu
Jan 18, 2009 - permalink
Sorry if this sounds excessively snarky, but the first place I'd look is a gym or some sort of fitness or self defense class.  Keep in mind, though, that the type of girl you're describing is rare - and probably tired of people looking specifically for her type.  I'd imagine it would be something like a rich guy tired of meeting girls who were going out of their way to find a rich guy.  I could be wrong, though.
1945184
blackarckana
Jan 18, 2009 - permalink
No need to apologize friend, I believe you're correct. I'll try a self-defense class. Indeed such women are rare and are probably sick of men who are after them, however, I'm also the kind of man that women hunt after in a similar manner. A female friend told me it was something of a glean in my eyes. Perhaps it's due to a pheromone rather than simply my looks and dress (which are the male equivalent to a "girl next door", whatever that may be)? There's no telling what could happen, of course, except the inevitable "nothing" that comes of making no attempt. Thank you very much, I think Tai-Chi would be my best bet.
1945185
Chainer★
Jan 18, 2009 - permalink
What about just visiting any place that attracts single women (wearing tanktops or dresses, hopefully) such as bars, for example? From the tone of your post, you've probably already tried... but my general experience is that if you see enough women, a few of them (perhaps very few, but a small fraction nevertheless) will have some muscle tone.

Friday night, for example, I went swing dancing with a few friends. Even though the weather outside was quite cold (about -10 F / -23 C), most of the girls/women were wearing dresses with no sleeves, and some were visibly athletic, if not too muscular. I did, however, dance with a girl who graduated from college last year and seemed to be in all-around great shape, with especially noticeable (and impressive) vascularity in her forearms.

It just seems to me that women who might take a martial arts class are probably there rather for the class itself than to pick up men.

Indeed such women are rare and are probably sick of men who are after them, however, I'm also the kind of man that women hunt after in a similar manner.

At least you're not lacking in confidence  ;D
1945186
bkd
Jan 19, 2009 - permalink
If even a mega city like New York doesn't offer the diversity of girls to satisfy a certain taste then I'm glad I don't miss anything not living in such a metropolis. :D

Anyway, my experience is the same as Chainers... athletic girls (next door types) aren't that rare.
Btw - more muscular athletes are usually surrounded by their own kind. I'm pretty sure they expect similar athleticism of their vis-a-vis when it comes to dating. So better hit the gym :D
1945187
blackarckana
Jan 19, 2009 - permalink

What about just visiting any place that attracts single women (wearing tanktops or dresses, hopefully) such as bars, for example?

Yes, you are correct in saying that I've tried bars. However, bars are places where people go to "hook up", not the place you would find someone looking for a serious relationship. However, I really like the tip on going places where girls bare their arms and legs liberally. That would simplify things a great deal. My mosy humble thanks to you.
1945188
blackarckana
Jan 19, 2009 - permalink

If even a mega city like New York doesn't offer the diversity of girls to satisfy a certain taste then I'm glad I don't miss anything not living in such a metropolis. :D

Anyway, my experience is the same as Chainers... athletic girls (next door types) aren't that rare.
Btw - more muscular athletes are usually surrounded by their own kind. I'm pretty sure they expect similar athleticism of their vis-a-vis when it comes to dating. So better hit the gym :D

Well, it's that New York City doesn't offer it, it's just that people are moving by so quickly it's difficult to chat. Plus, there's always the chance that she may not be single, and that her boyfriend is somewhere amidst the crowd, potentially with a gun in his pocket. Also, there are many girls with Athletic builds, however it doesn't mean that they're athletic. In fact, some of them even fake their six packs by applying make up [Check this out: http://www.youtube.com/watch?v=7pVmmsuuc5U] and fake boobs are a commonplace. Not many of them train for athletic and aesthetic purposes, only people who go to the gym casually. The ones that do, from what I've seen do not fit into the "Girl Next Door" type. Many of them are actually in their 40's and 50's (although younger in appearance) and have children my age (23).

In terms of the gym, I'm very athletic, sometimes taking a whole block of courses in one day. Even some of the most athletic women (including professional dancers, and advanced kick boxers) cannot keep up with me, but then again, I am training my own style martial arts and looking to make it similar to the indigenous martial arts (think Xiaolin/Shaolin Monk) which calls for high levels of discipline, something I believe, our Western Society in crucial need of.

Again, Thank You All Very Much!
1945189
parsnip1965
Jan 30, 2009 - permalink
I agree with the swing dance suggestion.  Most experienced dancers have some visible muscle and swing is a particularly athletic dance style.  Also consider the "dance sport" type of ballroom dancing which has been made popular on Dancing with the Stars.  It is generally hard to meet girls at the gym since most of them are there to work out, not meet guys, but in a dance club or dance class it is all about the social life.
1945190
vindicator58
May 27, 2009 - permalink
I have found the gym rats to be a little edgy until they get to know you, and that is seeing you often in the gym for maybe months before they warm up.  They hate people checking them out and are very verbal about it.  When you can kick a lot of guys butts, being mouthy just comes with it.  I would like to have been friends with a  lot more of them during my 25 years hitting gyms but it is hard to become very close to many.  I happend to find a cute one and married her, but I still love looking around!
1945191
biflexer
May 28, 2009 - permalink
I'm taken but I believe this is what you're looking for? 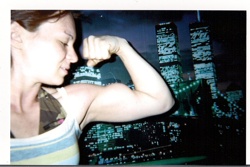 Seems to me it's never a good time to hit on girls.  They always hit me back!

"Build your own." That was a reply from one FBB at a messageboard way back. She'd gotten tired of guys hitting on her online which can be a whole lot more than in real life. If your lucky enough to find a gal maybe you can convince her to join you in the gym. I've seen quite a few guys do it.
1945198
blackkusanagi
Jun 20, 2009 - permalink
Smart advice Mass.
1945199
ursus
Jul 17, 2009 - permalink
Major amusement parks in the summer.  Lots of girls of all shapes and sizes wearing tank tops and shorts.
1945200
musclemaster
Oct 11, 2009 - permalink
Do you know what Tai-Chi is?  It's that slow meditative martial art.  You're more likely to find old guys in there.  Look, you're talking about finding a girl who is not extremely heavily muscled, but with some decent tone, right?  To me, this says "cardio" and/or health nut.  When it comes to martial arts, etc - why not find a girl who is into boxing or karate or something a lot more active??  Here's a list of suggestions off the top of my head:

1.  Health food store (organic food etc)
2.  Supplement store (GNC et al)
3.  The gym - eventually, you WILL see one on the treadmills, guaranteed
4.  General public areas - college campuses, stores etc - like Chainer's post suggested, the law of large numbers will eventually work out in your favor.  At least 1% of girls out there have some definition in their shoulders and arms.  Maybe more.
5.  Athletic events - basketball, baseball, football games - someone in the stands will be buff by the same principle
6.  Join a running/jogging club - or a biking club!  CARDIO!!!  Maybe take a spin class at the gym or any kind of organized class at a gym - yoga classes and most aerobics classes are typically included in your membership, and are usually dominated by women (90% or more depending on the class)
7.  The internet - the ultimate large population pool if you know how to work it.
8.  Public parks - playing tennis perhaps, jogging, or walking a dog perhaps?
9.  Collegiate gymnastics meets or other female collegiate sporting events - only drawback is they'll be on the defensive because they're not in hook-up mode at that time...
1945201
ursus
Nov 06, 2009 - permalink
The Internet?  90% of the hot chicks, with muscles or without, are fake.   :P   Unless you're paying for their webcam ...

You'll find plenty of female athletes in college but many of them bat for the other team.
1945202
faceplant53
Nov 14, 2009 - permalink
I would also say the internet.  Especially MySpace.  There are some profiles on MySpace devoted to muscular women -- they've already done the searching and have rounded them up for you!

After MySpace, I would try other internet dating sites.

In real life, I would say a serious gym like Gold's or Powerhouse is where you will find them.  I used to workout at Gold's, and I think the bodies there were a bit more fit than you'll find at your average local gym.
1945203
musclemaster
Nov 16, 2009 - permalink

You'll find plenty of female athletes in college but many of them bat for the other team.

Fakes are easy to spot, and not many people think to make a fake muscle girl profile - so, i disagree completely with your percentage - i think it's actually rather low, but of course it exists.  It's more like 90% real, i would say.
« first < prev Page 1 of 1 next > last »
/comments/render_markdown/
“ 🔗 B i 1. • help Preview
Email: girlswithmuscle (at) gmail (dot) com
Privacy policy | Report abuse