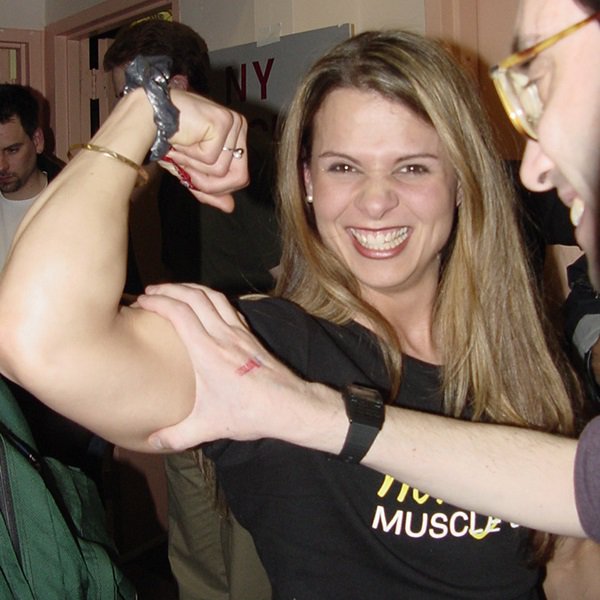 I bet it"s rock hard too!

I was there for this. I was the main "guard" to make sure nobody touched the girls without authorization. Most of the girls did not mind this type of thing. The tickets were $75, so not a bad deal to get to meet Elena and others for those who paid.

I miss Elena, always thought she was so cute and sweet and if I recall pretty awesome legs.

Elena was very close with Heather Lee. Those 2 always hung out and usually came together at this event. They both did some powerlifting with fbbing as it was starting to lose sponsors. Training partners.

WEll I miss seeing her current pics around. Hope she is doing well.

Agree Kristi. She was married to a nice guy (seemed like), but have not heard what she or Heather are up to these days. This was 04 I think from the background (different venues over the years). That was a ways back. She and Heather have not out out new training stuff in close to a decade. My guess is she is retired from the sport for now.

I'm sure you are right. I 'retired' from the sport in 2008, but I still post stuff. But maybe the gym didnt agree with her long term I dunno. Anyway.. I liked Elena.

She seemed to be nice to me too Kristi. She was more reserved than some of the fbbs, but very nice. I met the hubby who was very nice right away and did not want to bother her out of respect for both. She and Heather were both real nice. I agree. They both lived in Jersey and trained together.

Those shows were always fun and often loaded with several fbb stars plus a few faces in the crowd every so often. I was grateful they asked me to take in the shows for free for a few small favors. There was only one negative experience and nothing to do with the girls.

I hope she is well too.

At least the guy wasn't shy about grabbing her thick powerful arm muscles, as many who are granted that opportunity tend to be. I just wish he had placed his hand a little further up her arm so we could see more of her towering peak!

@fbb She and Heather used to train for powerlifting with 2 huge dudes who were 6-3 and 6-5 and about 350 each. They both enjoyed the sport, tho Heather confessed to me that the equipment used definitely helped increase lifts totals. She and Elena were both surprised at how much the equipment helped max lifts since they had both been in fbbing a while before they tried some power meets.

Those are some great totals considering Elena was not a powerlifter for long and she was not super big. She was not in the heaviest weight classes. She was in the middle.

Always a big fan of Elena since she first appeared on the Valkyrie site. Zig, this is from the New York Muscle Club thing that Mike, Tre' and you guys put together? $75 was a HUGE BARGAIN if some of the girls actually allowed a little bicep squeeze. From what I've seen, Elena was also one of the coolest muscle girls around. She kinda understood our "SPECIAL" needs?

Those guys put it together. I just did some collections and making sure the girls were not upset with anything in exchange for a free show. That was a good deal. Mike started the club and Boomer came in and took over when Mike moved from NY down south to build up herbiceps. Tre was a friend of the club being a popular player in the fbb industry.

I thought Elena was very nice. I didn't talk to her much in person, but her hubby Chris was a Yankee fan and we'd talk at the show he went to.

Those shows were great...some had some insane lineups and even great guests in the crowds. Others were a little less loaded. The girls all set their own rules as far as being touched and most of them were fine with photos. It was a fun thing, but the cost of rent and the payout to the girls became too much at some point for it to continue unless a new person came along. The lack of FBB contests and sponsors was a killer. DTV was a great site in that era and was a sponsor.

Elena was very close with Heather at that time. They trained together and were good friends. They used to pop in to DTV chat often back then with some other Fbbs DTV sponsored or even a few she did not on occasion.

I only had one bad experience and it was related to heat and traffic. I had to take the tickets or the $75 for walk ups (more than half) and the last place had 3 shows going on and all of us set up next to the bar to take tickets or money. The other 2 shows owners were stuck in traffic, so I had 3 shows worth of people coming to me and lots of questions about what my interest was in fbbs as they saw them walk in and realized the theme. They took me as the face and had some interesting questions I did not feel much like answering. It was an older group of couples there for a play.....good gosh. No biggie. The 98 degrees outside was overpowering the AC in that area too. I gave the bartender about 40% of her business.

Those were fun and Elena was well liked in the sport. She did some powerlifting with Heather and 2 monster sized guys that were way over 300 and tall. The girls put up some big numbers in PL. Fun times. We don't have shows anymore or mass gatherings other than the Arnold....which is very spread out.

He can't even get his hand round half of her arm

I dated a girl for awhile who had incredible arms. She NEVER understood why muscles on a girl were a turn on for guys!! She never lifted...her muscles must have been genetic and to her, a curse. The only time I ever got to see her arms was when we made love because she always covered them up, like her muscles disgusted her. If my hands ever wandered over to her arms for some erotic foreplay, for myself, she'd just shut down! I remember taking a shower with her and as she shampooed her hair, suds dripping down her biceps which would bounce up and flex as her fingers ran through her hair, she noticed what my eyes were watching and angrily kicked me out of the shower.

I tried so many times to convince her how incredibly hot she was and that her muscles enhanced her hotness. She would tell me I was sick or a nut :-(

I've dated my share of muscular women, too, but none of them had both the cuteness and bicep size of Elena in her prime. WOW!

@ luvembuff ... Same story happened to me. Very few women embrace their muscles and curves. Check out any tv show or movie and 9/10 women look drastically underweight / “actress thin” / not real. It’s not attractive, but it’s what women are brainwashed into thinking is beautiful. In Hollywood and on tv, what people would call a normal woman would be considered “fat.” That’s very sad. I’ve dated a girl before with beautiful biceps as well, and she hated them / covered them up / thought it was weird that I found them smooth and beautiful.

@RedSheHulk...and in an equally sad story on the flip side, my best friend had a wife with absolutely gorgeous biceps, that he hated!!!! He didn't insult her or criticize her, he'd just complain to me, behind her back about her stupid muscles. I would have given ANYTHING to have a wife like her. She was so sweet and even a little shy. I used to just secretly wish she'd leave him and give me shot at true muscle bliss. She eventually did leave him and moved away, 2,000 miles away :-( :-(

Xtra Worship with those

I always liked this pic. Feel the steel! ;)

A true legend in the industry!